I’ll be the first to admit that Google has some pretty incredible technology, and by and large, their websites tend to be pretty rock-solid. But, being in the SEO industry, I spend an awful lot of time working with their various tools, and have run across (and yes, reported to them) a number of rather irritating bugs that they just never seem to get around fixing.
Here’s my list of Zombie Google Bugs that refuse to die.

That’s the top of the last page of results for that search. I included the first result from this page because, hey, it’s hilarious.

Jumping Too Easily to Dumb Conclusions

I’m sitting here in Bend, Oregon, and search for just “attorney” (no, I’m not in trouble, I’m looking for a client’s page). There’s a Knowledge Graph result. One. Apparently, Google thinks there’s only 1 attorney in Bend anyone should care about: Click the Maps tab now, and you get the same kind of thing in the Maps view: Now, looking at this page, it LOOKS like this is the result you’d get if you just searched on Maps for “attorney”. BUT NO….click the search magnifying glass icon thingy, and…. 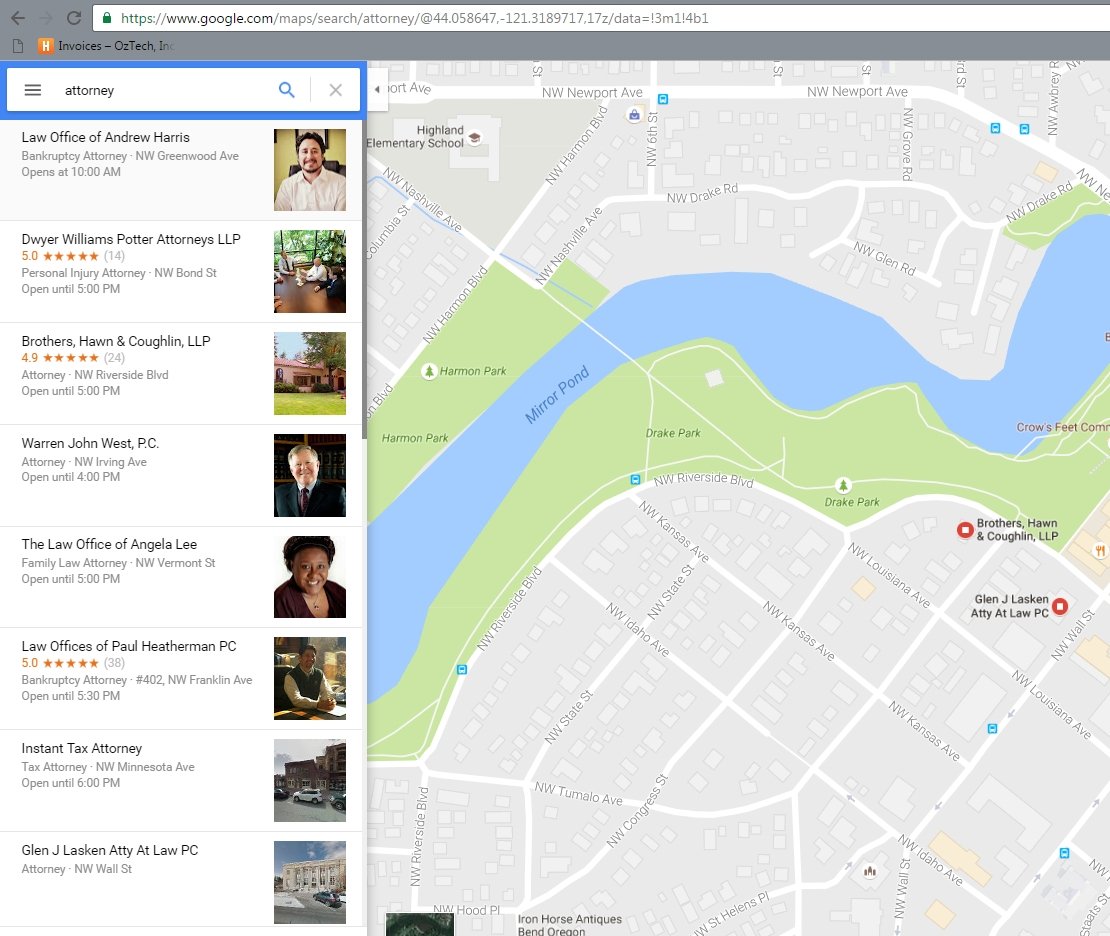 Yep. There are 33 Google My Business attorney pages in Bend, Oregon. How’d that one attorney get to be so special?

Google’s been tracking the number of pages from websites that it’s indexed for many years. You’d think it’d be a pretty core statistic to keep on top of…and, not really a very difficult statistic for them to get. But it’s been busted for several months now. Google acknowledged this in August, but doesn’t have an estimated date when they’ll fix it. I really like the folks who support Google My Business pages–they’ve solved a ton of issues for my clients, and you can get a callback instantly.
But the form you use to request the callback has a nutty bug: if you’re logged into Google, it pulls your email address and automatically populates the email field in the form like this: Now, if you click to request a callback, you get an error telling you that you entered an improper email address.
BUT GOOGLE, YOU PUT IT THERE!
And yes, that is the right email address…but the form doesn’t like mixed case. Change it all to lowercase, and *boom* it works fine.
I reported this bug about 3 years ago.

One of my clients today got a message about malware on his site. Conveniently, they give you this nice, helpful message about what might be wrong, and a list of the pages where they found the malware, and when:

I do a fair bit of Google penalty recovery for my clients. And I see blogspot blogs come up time and time again as sources of very spammy links.
The reason? It’s not really Google’s fault–they’re making it easy for anyone to create a free blog there. So it’s a target for spammers–not just for creating blog posts for the sole purpose of creating links to someone’s site, but also for blog comment spam.
I just find it ironic that what’s probably the #1 root domain for spam is actually owned by Google.
I’ll just call Blogspot One Giant Bug and leave it at that.

The idea here is great: rather than search for something everyday, get a notification when Google discovers some new web page that wasn’t in the results before.
The bugs here:

Now, if I go to Google Search Console’s Search Analytics, and look at the impressions for that term for my own website: I’m getting over 3800 impressions for that term. (An impression in Search Analytics means you showed up on a search results page that a user viewed…I’m in the middle of page 1 for this term, so impressions here should = searches.)
I’m pretty sure the Search Console numbers in this case are pretty accurate, as it lines up with Google Analytics traffic numbers for my pages.
How can I get 3800 impressions when there were only 1600 searches that month, AdWords?

This was one of my favorite tools for doing site audits. Want to find all the subdomains for a site, besides the www subdomain?
Just do a site: search, and add -inurl:www Or if you want to find all blog posts, you could do site:example.com inurl:blog. Fabulously useful, until they broke it about 3-4 months ago. Oh wait…they’ve fixed it!
I tried to get a screenshot for this blog post and it’s working once again (thank you, Google!).

This is a bizarre one…Google Search Console will often show as broken link, in the Crawl Errors section, for pages that not only haven’t existed for many months, but for which there aren’t any links…from ANYWHERE, internal or external.
Google bites down and holds on like a rabid dog for many months afterwards–even if you mark those as “fixed”…they just return.

Google has done a pretty amazing job recently of being able to extract data from web pages and show a featured snippet at the top of the page with just that information. Well, it’s amazing unless you’re the creator of that information, and now Google’s using your hard work and not sending you the site traffic you earned from your content.
But Google is not always pulling the right information–which is really much more of an issue that showing a bunch of webpages in the search results, some of which might be good answers to the question and some not. We’re conditioned to click into those web pages, look at what’s there, and decide for ourselves whether it’s goodness or bunk.
It’s a different story with the featured snippets–Google presents these as The Answer, right up top, no need to look further, folks.
When two columns of data are present, Google has a difficult time identifying which one should be used for order, but will display a featured snippets anyway. A search for Top 12 Month CD Rates brings back a table that starts at 1.25%. When clicking through, the best rate is actually 1.3%. What I think Google did is look at the longest string of minimum deposits that show an increasing pattern, and start there.

If you search a very similar query, “Best 1 Year CD Rates”, you get a featured snippet from the same interest.com page that starts in another area even lower in the page, but again it starts with an increasing minimum deposit order. Again, it doesn’t show the actual best rate of 1.3%. To wrap it up–what’s that Google is always telling us? Just build great content and links and rankings will magically come?
OK, let’s ask Google for some great content examples:

Thanks to Erica McGillivray, David Sottimano, Adam Melson of Seer Interactive, and Rand Fishkin from Moz for contributing examples for this post.