Late last week I got an invite to preview the new AdWords UI. After playing around in the interface, I thought I’d share some of the cool features with you, as well as comment on what this means for Google’s direction and for Google’s competitors. Spoiler alert: as with most things in paid search, this is another win for Google and another set-back for Google’s “competitors”, if we can still call them that.

The Line Between AdWords and Analytics (GA) is Becoming Blurred

The new interface borrows substantially from GA, both in terms of the expandable left frame navigation and the prominent and customizable graph at the top of the page. I noticed a few weeks ago that Google was encouraging AdSense publishers to integrate their AdSense account with GA. I’ve been told that Google Affiliate Network (GAN) publishers will also be able to integrate their affiliate stats with AdWords and other Google tools via GA as well. And I can only assume that once Google does something with their DoubleClick acquisition, this too will become part of the GA universe.
The Line Between AdWords and AdWords Desktop Editor is Becoming Blurred
One of the best features of Desktop Editor is the ability to view all Ad Groups or all keywords within a multi-campaign account at once. This feature is now available in the new AdWords UI and will definitely be a big time saver for those who prefer to use AdWords online instead of the Desktop Editor.
As in Editor, you can sort all of your Ad Groups or keywords by any column, so if you want to see the top click-getting keywords across all campaigns and ad groups, you can do this in a matter of seconds, as opposed to the old method of running a report to get this data. 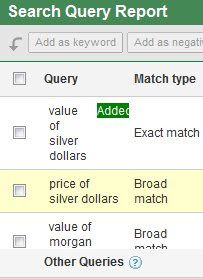 Yet another feature that eliminates the need to run a report is the “search query report” button. Using this feature you can instantly see which search queries got clicks off a broad match term. Pretty handy if you want to quickly add new keywords.
The same functionality exists for placements within the content network, which previously required a visit to the “placement performance” report on the reporting tab.
Better Quality Score Data 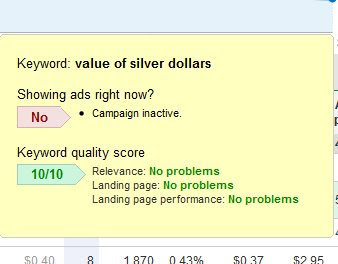 I don’t think I’ll ever be satisfied with the amount of data Google gives me on Quality Score, but this new UI at least makes the data a little more transparent and certainly a lot quicker to review. Click the thought bubble next to any keyword and your QS pops-up with details as to why you are or aren’t doing well in this category.
Overall Grade: Thumbs Up
Personally I was perfectly happy combining the old AdWords UI with the Desktop Editor, but now that I see the potential that the future of the AdWords UI might combine the best of Desktop Editor, Google Analytics, and the old UI, I have to say I am pretty excited. This is clearly an example of a better mouse trap that never occurred to me but that I am interested in using.
If you are frequent user of the Desktop Editor you have no doubt experienced some of its shortcomings – almost always due to the processing power of your computer. I’m talking about things like lengthy downloads of statistical data from Google, waiting minutes for a screen to load, or the occasional “not responding” message when you try to do too much too quickly. I’m happy to leverage the massive processing power of the Google cloud instead, all things being equal.
Oh Yahoo, Where Art Thou?
The AdWords UI and Desktop Editor were already light-years ahead of YSM (which doesn’t even have an Editor to begin with). I’ve been saying for years that YSM and MSN would do themselves a great service by simply copying Google’s UI and Editor. It appears, however, that Google is not resting on its laurels and YSM and MSN aren’t listening to my advice. The fact that Google is continuing to innovate when it already has a massive technology lead does not bode well for anyone that hopes for a more level playing field in paid search.
So kudos to the AdWords team for continuing to develop better and better tools and shame on YSM and MSN for letting Google get even farther ahead – folks, they don’t need the help! Carol and Steve, I hope you’re reading!