26 Character Headlines: Is AdWords Smarter Than A Fifth Grader?

We all know how frustrating it is to finish a really powerful headline for AdWords and then to discover that our masterpiece is a few characters longer than the 25 character limit. I suppose it encourages all of us to be more direct in our writing, but there are many times when I think to myself: “An extra two or three characters could only help consumers find the most relevant ad for their needs!” Apparently, some advertisers have found a way to get around this limitation. This morning, a client of mine pointed out a competitor’s headline that was 26 characters long.
Here’s a screenshot (it’s the third ad): 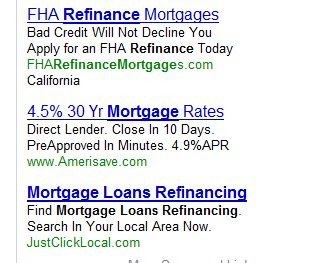 I’ve counted the characters a few times to be sure and it is in fact 26 and not 25 characters. My only guess as to why this is happening is that this reflects the exact query I entered into Google. I did a few other related searches and I could not replicate the 26 character result, so I think this is probably what is happening.
But still, how would Google even allow a 26 character ad to be approved, even if the entire query was included inside the dynamic keyword insertion brackets? My only thought here is that Google is allowing the advertiser to buy the singular phrase “Mortgage Refinancing Loan” and then automatically appending an “S” to the end to increase relevancy. I’m sure the advertiser doesn’t mind the increased relevancy and character count.
Has anyone else seen this happening? This is a first for me.